Dog, Toys and Rewards: Choosing the best toys for your dog

One of the best things about being a pet parent of a dog is how much they love to play, and choosing the best dog toys is an important part of your relationship. 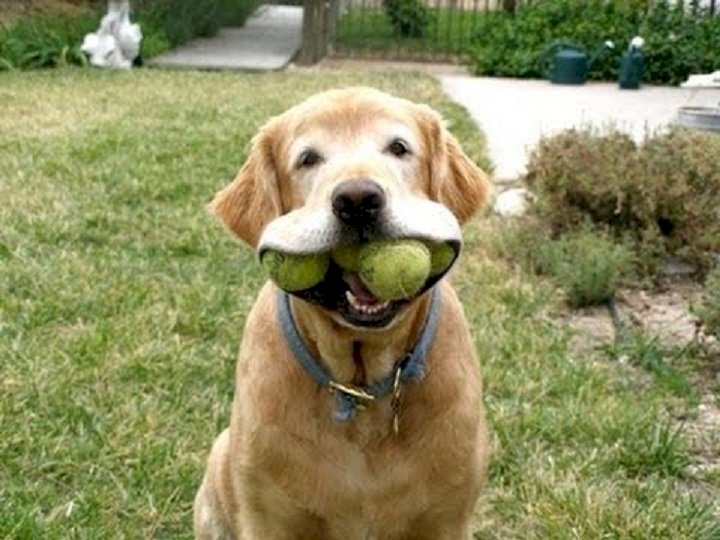 Age
Although he doesn't mature the way you do, you should still keep your dog's age in mind. A three-week-old puppy still has his baby teeth, so toys with softer rubber or plush, snugly fabrics would be a good fit for him. From three to nine months, your puppy will be teething, so it's best to avoid hard rubber and be sure to stock up! He'll be chewing on anything he can get his paws on, so a good variety of chew toys will keep him distracted from your favorite pair of loafers.

Once the teething phase passes, your dog will have a strong enough jaw for harder rubber toys and endless energy to play with balls or rope pulls. By age seven or so, your senior dog won't have the same jaw and tooth strength as a young adult, but it's still important to give him some softer toys to chew on and play with toys that encourage him to keep him active, like easy-to-toss balls and sticks. Luckily, there are plenty of options specifically made for dogs of certain ages, all of which match your dog's age with his size and his personal chewing habits.

Size and Texture
Even in adult dogs, the petite Yorkshire Terrier is unlikely to chew as harshly as the large German Shepherd, so they'll often need toys that are considered more forgiving clenched in a smaller jaw. Similarly, a toy that is too soft can break into pieces and become choked on or ingested - causing gastrointestinal blockages as a result. If you notice a toy starting to show signs damage - such as a broken squeaker or breaks or tears in fabric or stuffing - it's typically best to replace it.

The right size toy is important as well. Something too small can be swallowed just as easily. A general rule is to make sure anything small enough to fit behind your dog's rear molars is a choking hazard.

Ultimately, you'll want to decide which types of toys will occupy your companion the best. Dogs, like people, will be able to indicate which toys they prefer over time.

Even armed with this information, navigating the toy aisle can still be a bit confusing. As you shop, consider these four toy varieties with respect to the need for your individual pooch, and you'll be well on your way to finding the perfect plaything.

Balls
There are rubber balls, plush balls, tennis balls, foam balls, squeaker balls, and more. Each bounce in different ways. Some float and glow in the dark - tempting options if you have a pool or nighttime routine! This classic option is a great way to keep your dog active, too. When you find the right-sized ball for your dog, make sure it's a durable-enough material for him to not chew it into tiny pieces. Balls also encourage you, as the parent, to get involved because dogs love a game of fetch or catch. This will help strengthen your bond over time too.

Tug Toys
Most dogs enjoy playing tug-of-war with their owners and other dogs. And although some may warn against this game to discourage aggression, there's nothing to worry about if your pup is properly trained. Perhaps the most important thing to remember with tug toys is to make sure your dog doesn't tear this into pieces. Tug toys are typically plush and made of linen, leather, fire hose, or rope, so it's necessary to replace them as soon as you see damage like shredding or notice missing pieces. It is also worth noting to avoid being to aggressive yourself if you are playing tug-of-war. You never want to be able to rip the toy out of your dog's mouth as this could great health problems for him. If you want him to let go of the toy, you need to train him to respond to commands such as "drop it" or "release." Also, while a dog's jaw is very strong, it is never a good idea to pull the toy vertically and get his feet off of the ground. This can cause jaw, neck and spine issues.

Treats and Chewables
Whereas anything can be a chew toy, there are some toys made specifically to be chewed on, and it's best to use them for that purpose. Generally made from nylon or hard rubber material, these items are built to last. Some can even be stuffed with treats for training and long-lasting entertainment, while others are enjoyable as is. They should be soft enough to chew them with no teeth at risk of breaking, but durable enough so they don't easily break down into small pieces. As your dog grows from pup to adult, however, you'll often find you have to change the size and durability of the chew toys you bring home. Just be sure you're using healthy treats in your toys to keep him extra healthy while you keep him active!

Plush
Plush toys are a favorite of many dogs, but unfortunately they're unsafe more often than not. As easy as they are to be ripped apart and ingested, though, plush toys can still be fun when fully supervised. Before your pup hits his teething phase, plush toys are great options to give him to snuggle up with at night, too. If your dog loves them, you shouldn't write them off right away. Just make sure your pup knows which plush toys are his, and not a family member's stuffed animal or pillow. Choosing the best dog toys will ensure you both safe, fun playtime. Toys, much like treats, can be used as a training device. If you notice your dog gravitating to a particular toy, toss it to him as a reward when he performs a command you've requested such as "sit." Training him to understand which toys are his is also important part of training. This will help guard you against any destructive behavior that might ensue from him chewing on things such as chews, furniture or children's toys. Remember that your choice should depend on the age, size, and intensity of his chewing habits. Also, keep in mind that as your puppy ages, you'll go from puppy toys to adult toys and then even to senior toys. While safety should always come first, it should be shortly followed by fun.

The Muses – the Elder, the Younger 9 Muses and the Appollonides Muses!...

The Olympian Gods of Mt Olympus