The Myth and Story of Pandora

The Myth and Story of Pandora 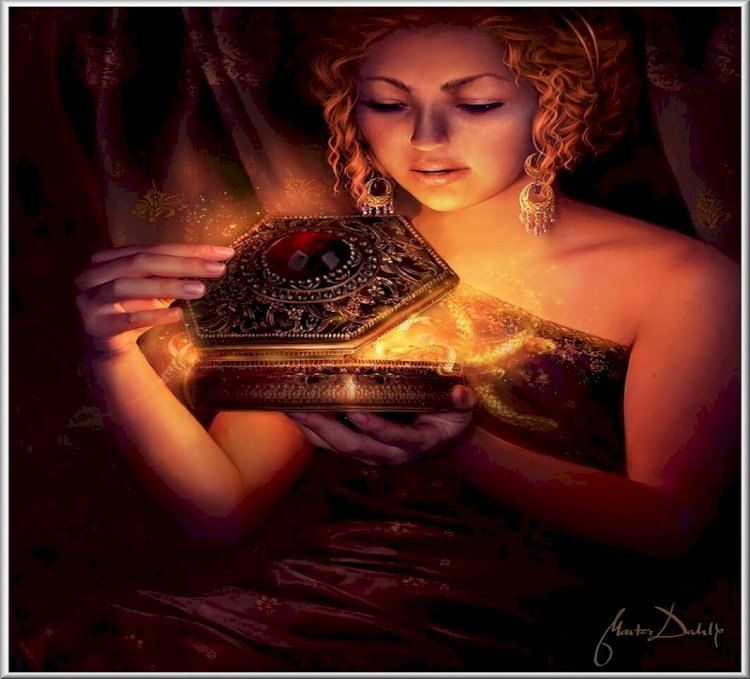 The woman that Zeus sent as a beautiful and treacherous evil to mortals in punishment for their possession of Prometheus' stolen fire was named PANDORA (meaning: "all gifts").

He had Hephaestus fashion her out of earth and water in the image of a modest maiden, beautiful as a goddess.

Athena clothed her in silvery garments and her face was covered with a wondrously embroidered veil.

She placed on her head lovely garlands of flowers and a golden crown, beautifully made and intricately decorated by Hephaestus; and she taught her weaving. Aphrodite bestowed upon her the grace of sexual allurement and desire and their pain. Hermes contrived in her breast wheedling words and lies and the nature of a thief and a bitch. All at the will of Zeus.

Zeus sent this snare to the brother of Prometheus, named EPIMETHEUS, who received the gift even though his brother had warned him not to accept anything sent from Zeus. The name Prometheus means forethought, but Epimetheus means afterthought.

Zeus sent with Pandora a jar, urn, or box, which contained evils of all sorts, and as well hope. She herself removed the cover and released the miseries within to plague human beings, who previously had led carefree and happy lives: hard work, painful diseases, and thousands of sorrows.

Through the will of Zeus, hope alone remained within the jar, because life without hope would be unbearable in the face of all the horrible woes unleashed for poor mortals.

In Hesiod, Pandora is not motivated to open the jar by a so-called feminine curiosity, whatever later versions may imply.

Mnemosyne – the titan goddess of memory and remembrance!

Orion – The complete story of Orion !