Here you can find the methods for advanced dog training. Turn your dog into a super dog! 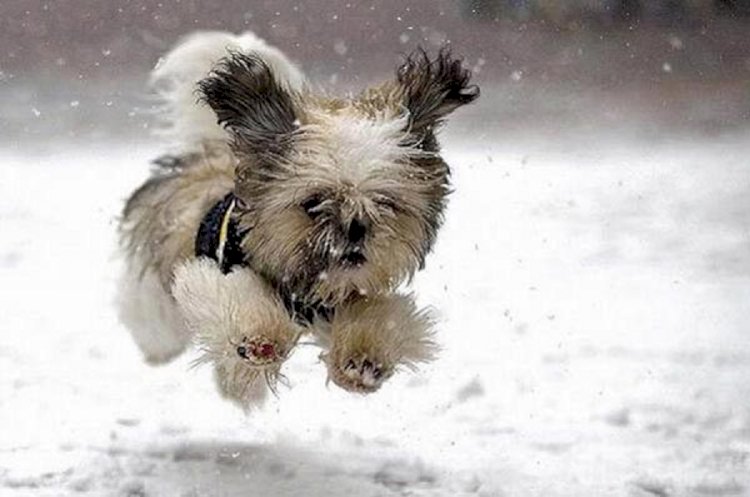 Hopefully you began training your dog when he was a puppy. Teaching him basic commands when he is young makes more advanced training much easier once he is old enough to learn these more complicated commands. Many intermediate commands require your dog to perform one or more basic commands as a starting point.

The commands below not only build on the basics your dog already knows but can also help the two of you deal more confidently and effectively with real-life circumstances.

The usefulness of the stand command may not seem obvious at first. After all, dogs generally spend a lot of time on all fours, so why would they need to be asked to do so?

The stand cue comes in handy if you want your dog to pose for a picture or if you plan to show him in conformation, to begin teaching him to stack (the special standing pose that every show dog must strike).

How to Teach Stand
To teach your dog to stand on cue, do the following:
Have your dog sit.
Hold a treat at nose level about 6 inches away from his face.
Say "Stand". As you say the word, move the treat away from your dog's face, being sure to keep the treat at nose level. As you move the treat away, your dog will stand in order to move forward and follow the treat.
As soon as your dog is on all fours, mark the behavior with the word "yes"! and treat.
Repeat this sequence until your dog is performing this behavior consistently and reliably.

At this point you can begin cutting back on treats. However, if you and your dog are in a real-life situation that lends itself to using this cue, don't hesitate to use treats. For many dogs, such situations are too distracting to deal with unless they have a tasty incentive to do so!

The place command requires your dog to take himself to a designated area when asked to and to remain there until released. This cue is incredibly useful in a variety of situations - particularly those involving guests in your home. That said, any time you don't want your dog to be underfoot, either for the sake of your convenience or his safety, knowing that he will go to his place when asked will make life easier for both of you.Interestingly, many dogs learn this cue (or a variation) without their owners making a conscious effort to teach it to them.

But if your dog hasn't learned a similar cue on his own, it's never too late to teach him. (Note: He should know the down and the stay before you begin teaching this cue).

How to Teach Place
Here's what to do:
Leash your dog.
Say "Place" (or "Bed", or "Nighty-night", or any other word or words, as long as you use those same words consistently) and lead your dog to the place where you want him to go.
Say "Yes"! and treat.
Repeat until he appears to understand what you mean when you give him the cue. At this point, remove the leash and give the cue. If he responds, say "Yes"! and treat. If he doesn't, reattach the leash and lead him to the place where you want him to go.
Once your dog can take himself to his place on cue, ask him to lie down and stay. Have him remain in the down position for about 15 seconds. Then say "Yes"!, treat, and give him his release cue, "Okay".
Repeat until your dog can remain in his place for about three minutes.

The touch cue involves asking your dog to touch his nose to your hand or an object. Like so many other commands, this one has multiple applications, starting with being able to direct your dog wherever you want him to go without having to apply any force to do so. For example, if you want to move your dog to one side of your body or the other and he knows the touch cue, all you need to do is hold out your hand or object at the place where you want your dog to be, say the command, and bingo! He's there.

This command is particularly useful if you and your dog plan to compete in dog sports, especially agility. The reason is that often a dog must touch a precise spot on a course or piece of equipment to earn the maximum number of points or even qualify. For example, a dog who's venturing down a teeter-totter in an agility trial must go all the way down to the end; jumping off the downward ramp to the ground is not permitted. By using the touch command, you can teach your dog to walk or run all the way to the end of the downward ramp.

How to Teach Touch
No matter what reason you might have for wanting to apply this cue, here's how to teach it:
Take a treat and rub it on your palm so that your hand carries its scent.
Hold your palm out no more than 1 foot from your dog's nose and say "Touch".
When he leans in and touches his nose to your hand to sniff the scent of the treat, mark with "yes"! and give him a real treat.

Some dogs are hesitant to touch their noses to an open hand. If your dog is one, try teaching him to touch the top of your closed fist.

ASKING TO GO OUT

Most housetrained dogs really try to tell their people when they need a potty break. Some sit directly in front of their people and stare at them, hoping those people will figure out why they're being stared at. Others take themselves to a door that leads outside and stare outside; they, too, are hoping that their people will figure out what's going on. Still others lie down in front of those doors, perhaps trying to get themselves as close to their outdoor potties as they can. In any case, unless they can get outside on their own via a dog door, access to their potties depends on being able to communicate to their people that they require such access.

Here's what you can do:

Find something that you can hang from a doorknob within reach of your dog's nose or paw. Sleigh bells or wind chimes (if the chimes aren't sharp) are ideal because they make a pleasant noise that you can hear even if you're in another room of your home.
Ring the bells every time you take your dog for a potty break.
Soon he will try to examine the bells. When he does-even if it's a single furtive sniff-say "Yes", give him a treat, and take him outside to his potty spot. Repeat every time he examines the bells. The idea here is to associate interacting with the bells to being taken outside to potty.
Eventually your dog will go beyond examining the bells to actually trying to manipulate them by tapping them with his paws or nose; when he does, take him out and give him extra treats. Give him a few more treats if he potties.